Your Guide To Purchasing A Home 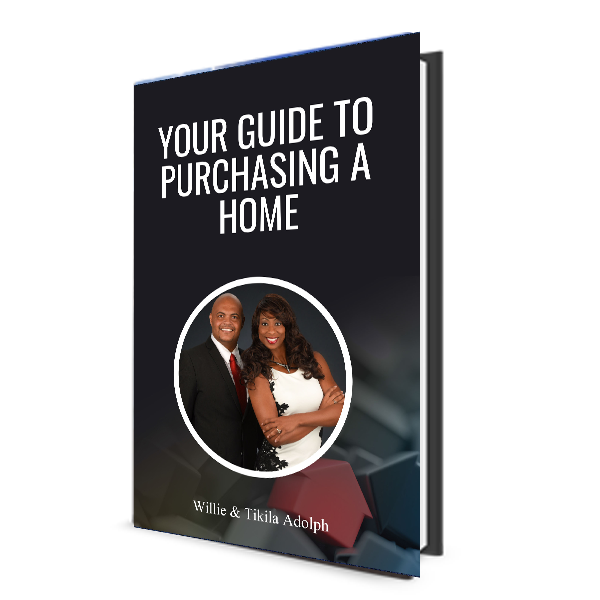 In This Book You'll Learn

As a home buyer, you don’t pay a commission for working with a real estate agent. That’s why you have nothing to lose by hiring a great one.

You’ll learn how to determine your needs vs. wants in your next home, discover the best places to look for houses, and ultimately find the perfect home.

How to Loan Shop

This book offers a guide to the lending process, including advice on how to get the best rate and programs available to different types of buyers.

Negotiations can make or break real estate deals. Buyers will learn how to keep the ball in their court and make smart decisions to seal the deal.

Much of his young life, Willie Adolph was raised in Los Angeles, California.  Willie aspired of being a Psychologist. Tikila was raised in Spring, Texas with her three siblings. As a child, Tikila aspired of being a teacher. Never in a million years did they think they would stumble into the real estate industry, but you cannot always predict where or when you’ll discover what you’re meant to do in life.

Willie and Tikila were taught at a young age that if you want something in life, you must work for it. So that is exactly what they did. And they worked hard. As the years went by, the Adolphs worked their way from JOB after JOB never wavering in their resolve to become the best version of themselves with each career move.

Willie & Tikila got into real estate industry in 2002 when they decided to purchase their first home and it did not go through. They went to a new home builder without a real estate agent and no clue what the process was to purchase a new home. At the time, they were told they were approved for the home loan and the Adolphs gave the builder’s sales manager the earnest money deposit, signed the sales contract, and were ready to move! They gave their apartment complex, where they had been living for three years, with their two children, their thirty-day notice to move out. About four weeks before their closing date they stopped by the builder’s office, to follow up and check on the home. It was then that they were told that their home loan had been denied with no explanation.  They lost their home and their earnest money deposit. As soon as they received the horrible news, they went back to the apartment complex to extend their apartment lease; unfortunately, they had to leave. The Adolphs realized that they were homeless. At the time, Willie was a store manager and Tikila was a hotel manager, then later became an apartment leasing agent. Willie asked his mother if he can bring his family to live with her, and she said that she was okay with his family living with her.  After seven months, The Adolphs decided to move to Katy, Texas.  After many situations dealing with renting an apartment leasing, Willie and Tikila became licensed loan officers in 2002 and their life changed forever! They moved several times; they became licensed loan officers and purchased their first home. After a few years later, they purchased their second home two days before Thanksgiving in 2004. They began helping many people achieve homeownership. The Adolphs set out to help as many individuals and families as possible. When they first got started, they envisioned how they wanted their lives to look like in the future. Willie and Tikila saw themselves helping others, so others did not have to go through the same heartaches they went through.

As their careers advanced, Willie and Tikila found themselves working with new homes and first-time home buyers. They are experts in negotiations and credit restoration. With their experience in the mortgage industry, they will be able to help others understand their mortgage options. They also work closely with our Hometown Heroes, those in the Military, Law Enforcement, Firefighter and EMS, Healthcare Professionals, and Teachers.

Willie and Tikila Adolph live in Katy, TX with their two dogs, Dash and Princess. In their free time, Willie enjoys playing and coaching basketball and reading. Tikila enjoys exercising and reading. Willie & Tikila aims to provide the highest level of service to their clients and takes deep pride in helping them achieve their real estate goals.

Want A Free Copy Of My Book?

Let Us know where to send it!

By clicking on REQUEST YOUR COPY you are confirming that you agree to our  terms of use.

We agree to always respect your privacy at all times.

Thanks for getting in touch!